Language As a Source of Novel Bioactive Peptides: Peptide SVENSKAAKADEMIEN

Most peptides have been discovered from natural sources or via combinatorial chemistry methods, but the International Union of Pure and Applied Chemistry’s one-letter symbolism for the names of amino acids facilitates the use of language as a novel source of potentially bioactive peptides.  Any word, name, or phrase composed of 21 letters of the 26-letter English (or French, German, Spanish, or Swedish) alphabet can be viewed as not only a sequence of letters, but also as a sequence of unambiguous symbols for the names of amino acids (i.e., a peptide).  Protein database searches reveal that is sometimes possible to find such name peptides within the larger sequences of known proteins, but most are novel.  Peptides designed using this name-to-peptide method have been chemically synthesized, subjected to laboratory testing, and found to exhibit potentially useful biomedical properties.  This article describes research in the new field of name peptides, including a theoretical analysis of a peptide based on the name of the Swedish Academy, the organization that selects recipients of the Nobel Prize in Literature.

Polypeptides are polymers of amino acids (AAs) linked by amide, or peptide, bonds (Fig. 1) [1].  Polypeptides containing less than 100 AAs are referred to as peptides, and those containing more than 100 AAs are called proteins.  A well-known peptide is insulin, a hormone that is involved in carbohydrate and lipid metabolism, and that is used in the treatment of diabetes [2].  The human form of insulin contains 51 AAs.

There are 21 amino acids that are genetically encoded and commonly found in peptides and proteins isolated from natural sources [1].  The International Union of Pure and Applied Chemistry (IUPAC) has developed a nomenclature for AAs that includes trivial and systematic names, 3-letter abbreviations of trivial names, and 1-letter symbols for AA names (Table 1) [3].  Note that the word, letter, here refers to letters of the 26-letter English alphabet, but it could also refer to the same letters found in, for example, the French, German, Spanish, and Swedish alphabets [4].  Twenty-one of the 26 IUPAC 1-letter symbols are unambiguous symbols for AA names, but 3 letters have ambiguous assignments (i.e., B, X, and Z) and 2 letters have no assignments (i.e., J and O).  Descriptions of the AA compositions and sequences of peptides and proteins can be quite cumbersome when using the trivial or systematic names.  Consequently, the 3-letter abbreviations and 1-letter symbols are the methods used most often in scientific publications to represent AA sequences, and 1-letter symbols are the method used to store the AA sequences of 467,912,207 proteins (as of April 16, 2022) in the nonredundant protein sequence database of the US National Center for Biotechnology Information (NCBI) [5].

A new source of peptides.

Although undoubtedly unintentional, the decision of the IUPAC, to use single letters of the English alphabet as symbols for the names of AAs, had the side effect of creating a new and very large source of peptides.  Most bioactive peptides have been obtained from natural sources, or through combinatorial chemistry [6], but the new source of peptides is based on language rather than nature.  Strings of English alphabet letters, such as found in names, words, phrases, and sentences, can also be viewed as strings of AAs, or peptides.  For example, the English, French, German, Spanish, and Swedish dictionaries contain a total of about 1,685,000 words (470,000 English, 135,000 French, 330,000 German, 150,000 Spanish, and 600,000 Swedish words) [7], a substantial portion of which are compatible with unambiguous IUPAC 1-letter symbols for AA names and could represent “word peptides”.

Another large source of language-based peptides are names, personal or otherwise.  All cultures place a special emphasis on personal names, which are nothing more than sequences of letters [8-12].  In the business world, company and brand names are considered so important that they are trademarked [13].  Consequently, names also can be considered a reservoir of novel peptides (i.e., name peptides).

Finally, since peptides contain less than 100 amino acids, it is also possible that phrases and short sentences, containing less than 100 letters, could also be considered as peptides.  For example, the English phrase, “Happy as a clam at high tide.” [14], contains 22 letters, all of which are compatible with the unambiguous IUPAC symbols for the names of amino acids.  If the spaces between words are eliminated, this phrase could be the basis for creation of the 22 amino acid peptide, HAPPYASACLAMATHIGHTIDE.

Names, words, and phrases that are composed of the letters of the English (or French, German, Spanish, or German) alphabets may occur as peptides in nature, and this possibility can be tested by subjecting the name, word, or phrase to a BLAST search [15] of the NCBI nonredundant protein database.  It is often possible to find such names, words, and phrases as portions of larger proteins in the database, and sometimes in great abundance (i.e., greater than 5,000 occurrences).

Conversion of a name to a name peptide

As an example of the name-to-peptide method, the Swedish name of the Swedish Academy, Svenska Akademien, was chosen for theoretical analysis.  According to its website, “The Swedish Academy is an independent cultural institution, founded in 1786 by King Gustaf III in order to advance the Swedish language and Swedish literature. The Academy has also awarded the Nobel Prize in Literature since 1901.” [16]. The first step of the name-to-peptide method is to remove any spaces, punctuation marks, or symbols from the name that are not compatible with the 21 unambiguous IUPAC symbols for the names of AAs.  Therefore, Svenska Akademien becomes SVENSKAAKADEMIEN, which is shown in all capital letters to further emphasize that the sequence now represents AAs.

Determining if the name peptide occurs in nature

The next step is to determine if peptide SVENSKAAKADEMIEN has been found in nature.  This was done by doing a BLAST search of the NCBI’s nonredundant protein sequence database.  Although the complete sequence was not found, portions of the sequence were found within the larger AA sequences of several proteins (Table 2).  The sequences found in the database covered all segments of the search sequence, with some having 62% identity with the search sequence.  These results indicated that peptide SVENSKAAKADEMIEN is novel, and that its AA sequence is compatible with natural proteins.

Docking of peptide SVENSKAAKADEMIEN with the SARS CoV-2 spike glycoprotein RBD produced 60 models, 4 of which had the peptide located at the RBD-PD interaction surface.  AA residues involved in the RBD-peptide interactions of these 4 models are noted in Table 5, and the average interatomic distance between AA residues was 2.7-2.8 Å, within the range of hydrogen bonding

The example of peptide SVENSKAAKADEMIEN described herein illustrates the general approach used for name peptide design and theoretical analyses. The next steps would be synthesis and testing of the peptide, which may be reported in a future publication.

The name-to-peptide method was first described in 2003 [24, 25], and in subsequent years it has been found that among any particular group of names (e.g., Forbes List of the World’s Billionaires) [26] usually about 25% of the names are completely compatible with the IUPAC 1-letter symbolism for the names of AAs.

The first name peptide to be created by chemical synthesis was based on the personal name of a prominent US government official [27]. When laboratory tested, it was found to be capable of inducing migration of human monocytes and neutrophils, and inhibiting the proliferation of human breast cancer (T47D) cells.  Unfortunately, the peptide was not completely compatible with the IUPAC 1-letter symbolism because its design included the letter, O, to represent Ornithine, which had not been assigned by the IUPAC as a 1-letter symbol for the name of an AA.

The second test of the name-to-peptide method involved the selection of a well- known company name, Walmart, and the chemical synthesis and biological testing of the 7 AA peptide, WALMART [28].  The letter composition of the name was completely compatible with the IUPAC one-letter symbolism.  Interestingly, like the first name peptide tested, it was shown to exhibit anticancer activities against breast cancer cells.  The report about peptide WALMART was followed by a report from another research group which described the synthesis and testing of a peptide, HENRYK, based on the personal name of a research group member [29].  This peptide exhibited metal binding properties.

Additional name peptides are currently undergoing testing, but it is now apparent that languages, in conjunction with the IUPAC 1-letter symbols for the names of AAs, represent a very large and novel source of potentially bioactive peptides.

In addition to the potential usefulness of name peptides as biologically active compounds, the name-to-peptide method can serve as a means of educating the public about the concepts of peptides and proteins. Consequently, future name peptide research will concentrate on both organizational (e.g., company) and personal names, as both offer the greatest possibilities of being of interest to the public.

Table 6.  Results of ClusPro 2.0 [23] docking of peptide SVENSKAAKADEMIEN with the crystal structure of the ACE2 peptidase domain (PD) (modified from PDB 6M0J [20]).  Docking produced 32 models, but none of them had the peptide located at the surface of the ACE2 PD that interacts with SARS-CoV-2 RBD

Fig. 2.  Ribbon representations of the peptide backbone conformations of two structural extremes that are commonly seen in the three-dimensional structures of proteins, the ß-strand (top) and the α-helix (bottom).  Peptide SVENSKAAKADEMIEN was modeled with the Deep View/Swiss-PdbViewer program, v.4.1.0. [18] in the two conformations, energy minimized, and the models were saved as PDB files.  The PDB files were then viewed with the RasMol program [19], with the structures displayed as ribbons with monochrome coloration.  Measurements were also done with the RasMol program.  RasMol structures were then transferred to the MS Paint program for the addition of arrows, numbers and letters.  The ß-strand conformation resembles a flattened, slightly twisted, extended ribbon, whereas the α-helix is a compact, coiled, cylindrical structure held in this conformation by hydrogen bonding between amide linkages (i+4>i, where i = AA).

Fig. 3. Stick figure molecular model of peptide SVENSKAAKADEMIEN as a ß-strand.  The model was created from the PDB files described in Fig. 1 and using the RasMol program [19] to generate the stick figure.  Lettering was added with the MS Paint program.  The structure is 49 Å long and has a net charge of -2 at pH 7.

Fig. 5. Peptide SVENSKAAKADEMIEN as an alpha (α) helix.  This particular peptide structure contains 15 intrachain hydrogen bonds; 12 between amide linkages (i+4>i, where i = AA) and 3 additional hydrogen bonds at the ends of the peptide.  See the Fig. 3 legend for modeling procedures. 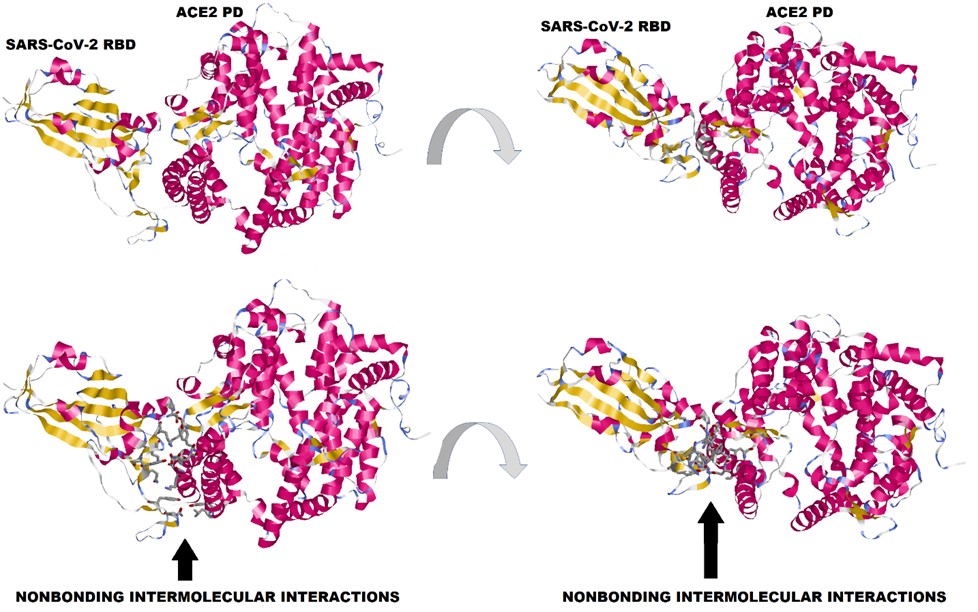 Fig. 7.  The three-dimensional structure of the complex of SARS-CoV-2 receptor binding domain (RBD) bound to the ACE2 peptidase domain (PD) (i.e., PDB 6M0J [18]).  The top two figures show the complex in two orientations that differ only in a < 90o rotation about the horizontal axis.  The lower two figures are identical to the upper two figures except that the AAs involved in nonbonding intermolecular interactions (hydrogen bonding, ionic, and hydrophobic; see Table 4) between the two proteins are emphasized as stick figures with CPK coloration.

D.W. was the sole author of this article.

This research did not receive any specific grant from funding agencies in the public, commercial, or not-for-profit sectors.